A Sticky Trick for All-Over Printing

In order to print over an entire t-shirt, the inside of the garment must be starched. This is the main difference between the basic screen print process and the process of all-over printing.

Starching is the action of spraying a starch-like mist to the inside of a t-shirt.

The purpose of starching a garment is to keep the insides of the shirt together during the printing stage of production. During production, each screen allows ink to be passed through onto the garment. When the screen is lifted, it is extremely important that the shirt remains flat and in place. If the shirt is moved or altered in any way, the print registration will not be consistent from screen to screen. Also, if the shirt lifts somewhat due to the screen pulling away, it can cause a wrinkle, which in result will cause a misprint since the ink will not be distributed smoothly onto the garment. 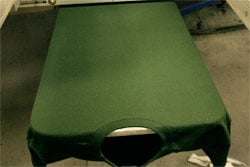 You can see the shirt is being held in place by the adhesive spray on the pallet and the insides of the shirt are not sticking together. 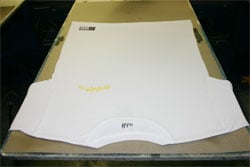 Since the entire shirt needs to be exposed to the screen, the shirt is starched to keep flat as the screen lifts off the garment. Instead of pulling the shirt over the pallet, it is placed directly on it.

Though the starch used by most decorating manufacturers is non-toxic, all decorated garments should be washed before being worn.